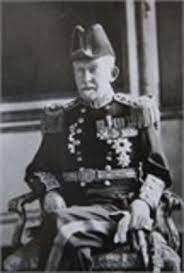 Born in 1871 in Wiltshire, the son of Major Walker Heneage and Henrietta, daughter of John Henry Vivian of Singleton, Swansea. He was educated at Stubbington, Hampshire. Stubbington School was known as the ‘cradle of the navy’. In 1886 he began a career in the Royal Navy, joining the battleship HMS Triumph as a midshipman under the command of Sir Algernon Heneage, a relative of his.

He married twice; firstly Helen Mary (daughter of Capt. E. de V. du Boulay) in 1912 and had three daughters, Mary, Anne and Rhoda. He divorced Helen in 1931 and married Beryl Stanley of Cardiff in 1931.

He assumed the name Walker-Heneage-Vivian by Royal Licence in 1921.

He retired from the navy to Swansea, at first to Parc le Breos, Penmaen, an estate left to him by Graham Vivian. He moved to Clyne Castle after he inherited it in 1921 following the death of Dulce Vivian.

He played a full part in the commercial, social and cultural life of the area. He became director and chairman of his family business, Vivian & Sons Ltd. (involved in the production of non-ferrous metals), and chairman of the South-west Wales Savings Bank. He was a Justice of the Peace, Deputy Lieutenant of Glamorgan, and in 1926 High Sheriff of Glamorgan.

He showed his interest in horticulture by the care which he lavished on his own gardens and by joining the Garden Society and the Rhododendron Society. He became an expert on Rhododendron cultivation and hybridisation. He sponsored many of the most renowned professional plant hunters of the day to collect seeds of plants in the wilds of China, Tibet and Burma. Trees and plants from across the temperate world were collected and planted in his gardens.

He was a founder and first president of The Gower Society. He was renowned for the warm welcome that he gave to the many important visitors who came to Clyne Castle. He died in February 1952. His ashes were laid to rest in the Vivian vault at Clyne Chapel.

As a result of death duties, it proved necessary to sell Clyne Castle which was bought by the University College of Swansea. It was subsequently sold to private individuals who converted the building into smaller dwellings.

The castle garden, now Clyne Gardens are owned and tended by Swansea Council.

His three daughters inherited nothing from his will. They had grown up at Clyne Castle, brought up mainly by a succession of Nannies, their mother living elsewhere after the divorce. Their father’s second wife Beryl had little interest in them in their younger years. Early years were spent in the vast acres of the estate and interspersed with frequent visits to Parc le Breos, often accompanying the Shoot which was a favourite pastime of the Admiral and his friends. The youngest daughter, Rhoda gives an interesting insight into the family life of aristocrats in her book “Water Under the Bridge” by Rhoda Campbell (Brown, Cowbridge, 1997).