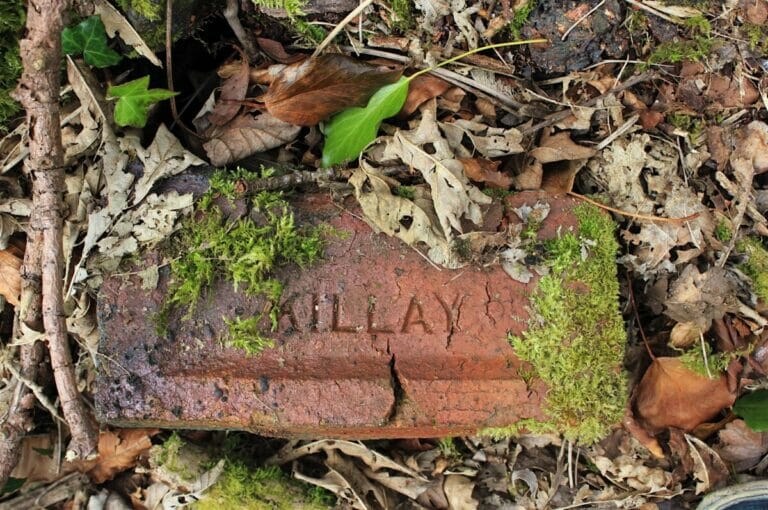 Mr Edwards’ family moved to Killay in 1949. His family has been in this area for many years: his great grandfather, Frederick Edwards, was a banker. He worked for the Gloucestershire Bank (which became Capital and Counties Bank, later taken over by Lloyds Bank). Evan Evans-Bevan had his account there and PE has a letter from Evans-Bevan about selling his brewery and considering selling his collieries (dated 3 September 1896 from Cadoxton House, Neath). It transpires that the brewery – Vale of Neath Ales – remained in his family’s ownership until 1968 when it was eventually sold to Whitbread. Later in our conversation, PE told us Evans-Bevan was only able to keep a few smaller coal mines when coal was nationalised in 1946, and the brickworks in Killay got its coal supply from one of these remaining smaller mines – he thought Skewen. It smelt of sulphur and consequently could not normally be used as house coal.

We met with PE to talk about his memories of the Killay brickworks. He remembers Phil Wilson (PW) who was the last worker there. (PW’s wife did the church flowers. PE knew PW’s daughter – she was only a couple of years older than him and died tragically young.) After production stopped in 1966, the site was manned by PW and Dan Morris covering the two day shifts. Previously there had been three shifts including a night shift.

The clay pit was still being worked; it was accessed by the track under the railway (now the bike path). Originally there was a tram, which transported the clay ‘up and around to be dropped into a hopper’. In the late 1950s and early ‘60s, a truck was used to replace the tram. It was bought new and never registered for road use.

The track was ripped up but the little engine was kept on a siding to the north of the works. PE showed us the siding clearly marked on the 1958 OS map.

In the early 1960s, he remembers two inhabited stone-built cottages in the woods which were located on the farm track linking Sketty Park Estate and the Clyne Cottages. This site once also formed a junction with an old offshoot line from the main railway which serviced the drift mine behind the Commercial. The southern end of this railway line also flanked the brickworks, the latter furnace complex having been constructed partially on the remains of its embankment.

One of the old cottages had been occupied by a fellow he knew as Clive who, he thinks, is still living in north Gower across the Common. PE later met Clive when working as a warehouseman for J T Morgan and once told him that he had resided in one of them.

BP told PE of the walking stick at the Railway Inn presented to Lewis Gill when the Commercial closed. PE told us that Lewis Gill was one of the last burners at the brickworks along with Dan Morris and Phil Wilson. Lewis Gill lived in what was the old Killay police house and when he retired, the vacancy was taken up by Cliff Arthur.

PE said there was a ‘pill box’ where the explosives for the brickworks were kept – this was on the east side of the tram track at the brickworks where the steps now go down to the river path and the Rhydydefaid boat level.

Dan Morris lived at 482 Gower Road. There was no electricity in the house – it was probably lit by gas as late as the 1960s. Cliff Arthur lived at 3 Dunvant Road and he, Dan Morris and Phil Wilson were the last three burners at the brickworks. Cliff Arthur, as a young man, once worked at the Dunvant Foundry. Dan Morris was ‘a big man’, a recluse – his brother died just before the war and his neighbour, Mrs Bowen used to cook for him and put the food through ‘under the hedge’.

PE and his friends used to go to ‘the cabin’ where the brickworks men heated up their tins of soup for lunch – they just threw the cans out of the window: there was ‘a huge pile’ of empty cans. There was an open fire in a hearth which the men would let go out after lunch but PE would get it going again. There was only a very dim light bulb in the cabin. PE described the night shift as ‘creepy’. He showed us where the cabin was on the 1957 OS map. He also pointed out the office building.

George Sturgess also often visited the burners and would spend hours sitting and chatting in the cabin. Originally from Northampton, George was a retired post office worker who lived in the semi-detached house next door down from the old Killay church schoolhouse on Gower Road. The school building was demolished in the 1980s; it was sited on the bend between PE’s house and the Railway Inn.

The local coal merchant was Aubrey Williams who also branched out as a haulier. His home was opposite Lewis Gill’s. One of his trucks was always used for collecting and delivering all the bricks. It was usually an old Commer truck and accessed the brickworks on what is now the track that passes Clyne Valley Cottages. There was a conveyor belt at the works which dropped the bricks into the truck for delivery. Lewis Gill’s son Des often used to drive the trucks for Aubrey Williams and take them to Cardiff, Maesteg and all across South Wales. PE’s first ever visit to Maesteg was with Des Gill and a load of bricks. Once the London Brick Company started up the local works couldn’t compete.

PE said production stopped in 1966. The site was manned by the burners as caretakers for a year or 18 months after closure. Phil Wilson was the very last man off the site. He had spent virtually the whole of his working life at the Killay brickworks.
After closure, PE and two friends used to go there to play but were not really allowed on: the police were aware and he remembers being warned off by them.

PE was told once that the slope opposite the Black Boy was reputed to have been a railway siding but this story is probably untrue. He does remember the barn at New Mill Farm being used for hay in the sixties by the local farmer.

One hundred years ago there had been a greyhound track where Woodcote is now. His house, on Gower Road between the church and the Railway Inn which overlooks Woodcote, was built in 1935. His grandfather bought it in 1949. The detached house next door down, however, was built in 1914 and was constructed on the site of Killay’s original chapel and its first place of worship. It was demolished around 1898 and the present dwelling house was erected on top of the chapel and much of the old furniture remains underneath.

Evans-Bevan owned several pubs in the area and supplied his Vale of Neath beers to them. The pubs included the Black Boy and the Commercial and the Found Out. The latter was named from being a haunt for the navvies building the railway from 1862 – they sloped off there to drink and were ’found out’ there. It was closed in 2011.

The Railway Inn was opened in 1864 to service the railway but used to sell Hancock’s which later became a product of Welsh Brewers Beers – a division of Bass. (There is a photo there of Binky and a dray delivering beer.). The railway itself was operative for exactly one hundred years closing in 1964. It had been an LMS line until nationalisation in 1949.