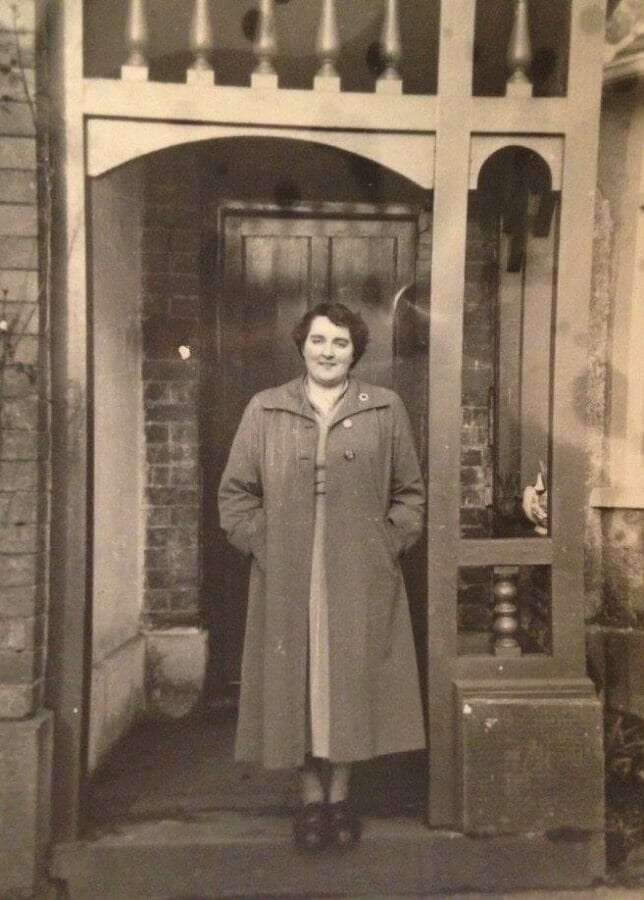 Christine was born in Hafod Lodge in 1956 and lived with her younger brother, mother, father, paternal grandparents Evans, Uncle Horace, Auntie Dulcie and Uncle Roy (who was mostly away in the army).

The Lodge, situated by the Sketty Gates off what is now Rhyd y Defaid Drive, was one of the entrances into the Sketty Park estate owned by the Morris family.  It was a three-bedroom house with no amenities (no gas, no electricity, no mains water, not connected to a sewage system).

Downstairs, entering from the front door on the right-hand side was a ‘front’ room; beyond this, to the left, was the ‘middle’ room which was ‘kept for best’ and contained a large round table.  This was often where the children played and entertained their cousins when they came to visit.  Beyond this was the kitchen where the family lived, listened to the radio and went to keep warm around the big shiny black range with brass fender and rods and a brass plate above the mantelpiece.  The range was fuelled by wood from Clyne woods.  When Christine first tasted Lapsang Souchong tea it reminded her of her grandmother’s tea which always tasted smokey because the kettle would hang from a log perched above the open wood fire of the range.  A back kitchen had a Calor gas cooker and a big sink and Christine remembers: ‘It was where we washed ourselves but sometimes my mother would put clothes in the bath and we’d stomp on them.  Lux flakes!’ The water was drawn from a local spring.  The toilet was a bucket in a small shed down the garden.  When full, this was emptied by the men into a trench dug some way away.

The Lodge had a stone garden wall but local Clyne bricks were used in the construction of some parts of the house and Christine has a piece of glazed, twisted Clyne brick which was used as a garden edging.

Christine’s father walked to Fforestfach from Hafod Lodge to catch the bus to work at Garngoch Number 3 colliery.  At work, it was an underground walk of a mile to the coalface to work at the Three Feet seam with a pick and shovel.  He was a short man and worked in collieries for forty years starting at Killan, opening and closing the ventilation doors to let the drams of coal go through.  He saw the coal industry develop from private mines to the start of the National Coal Board after World War II which then became British Coal and was eventually privatised.  He had retired before the miners’ strikes of the 1980s.

His family had lived at Whitewalls in Three Crosses when he worked at Killan.  His father broke his pelvis in an accident and subsequently could not work.  An illegal mining venture caused their garden to collapse but they filled it in and did not report the incident, having accepted a bribe from the illegal miners.  Subsequently, someone ‘grassed them up’ at the Poundffald Inn in Three Crosses and the family was evicted.  The family lived for a time in the weighbridge offices that had been abandoned in Clyne Valley.  Eventually, they moved into Hafod Lodge but Christine did not know who owned the Lodge, Sir Tankerville Morris, who had lived at the Sketty Park mansion, having died some thirty years beforehand.  At this time the Lodge was surrounded by parkland and Clyne woods.  Their neighbours were those living in the lodge on Sketty Park Drive and the Gills on Gower Road near Clyne Cottages.

The family had the keys to the gates situated by the Lodge which they would unlock to allow ‘posh’ horse riders and Boy Scouts through into the estate as they approached from the carriageway which passed through beech-woods behind Killay.  Other wealthy people would occasionally give them gifts, particularly members of the family who owned a Swansea company called Tom Smith & Clark.

The following photographs, taken by Christine’s family in the 1950s at Hafod Lodge, appear with her kind consent.

* Hafod Lodge was at what is now the entrance to Clyne woods from Rhydydefaid Drive.

A Clyne Valley Film - Commercial Colliery
A short film describing several historical features to be found close to the Old Carriageway west of Killay.
Read more >
A Clyne Valley Film - No 13 Steam Winding Machine
A short film on the No 13 Steam Winding Machine, also known as the 'Winding Gear'.
Read more >
George Valentine Sharp (aka ‘Sharpy’, the platelayer)
‘Sharpy’ the Platelayer who looked after the Railway line.
Read more >