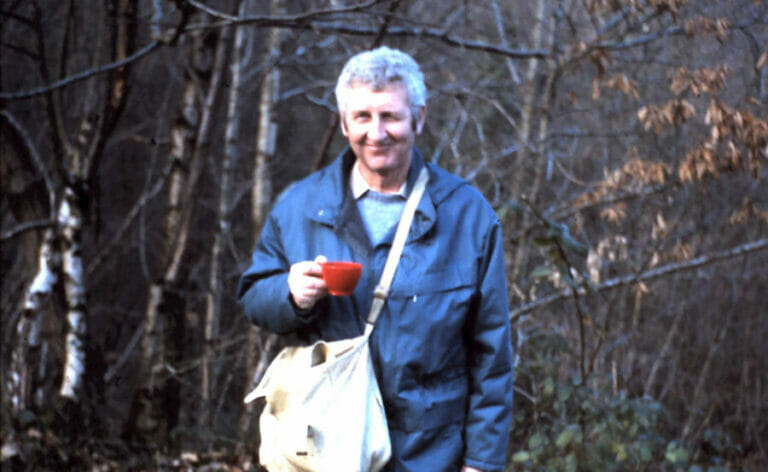 In 1943, 17-year old Peter Mathews began work in Clyne Valley under the Ministry of Supply in the timber industry. He was paid £3.15s a week. The scheme was principally run by the Women’s Timber Corps; the girls were known as Lumberjills.

His detailed account of this experience is in an article in the journal Gower, volume 40, p 38 and is well worth a read.

One story relayed by John Hayman from Peter Mathews concerns Sharpy, the platelayer. “On a Sunday, we pushed a rail bogie to Killay station to bring down a 40-gallon drum of diesel or oil. The barrel was loaded in the centre and four of us, including Sharpy, standing like sentinels, free-wheeled it back to the site. It was quite hair-raising, reaching a fair speed. Sharpy as brakes-man let it go a bit.”

Peter Mathews was interviewed by CVCP HF members at his home at Alltwen on 13 February 2019:

In the article in Gower, he refers to the Women’s Land Army – which, Peter told me, was an error: the ‘Lumberjills’ worked for the Women’s Timber Corps. The Lumberjills wore a green uniform; britches, beret and pullover. Some were from far away and billeted locally.

After leaving school, Peter worked for Jimmy Harris, a nurseryman at Blackpill. The greenhouses were between the road and the beach. Jimmy Harris particularly specialised in growing Arum lilies for wreaths. A wreath with the delivery cost 30 shillings. He also grew vegetables and trees which he was commissioned to grow for planting around the oil refinery. Local sewage was collected to fertilise the nursery soil. “No chemicals in it then, so good to fortify the land.” The three greenhouses were heated by a boiler attended by an old chap, Johnny Mogeridge, who’d check the boilers early morning and again in the evening. The nurseries closed after Jimmy Harris died. Swansea Corporation bought the land.

Bert Parrot worked as a driver for Jimmy Harris and “specialised in making cider – and drank most of it.”

Peter told of his memories of the Admiral (Walker Heneage Vivian) at Clyne Castle:

“He’d married into the Vivian family – they were the ones with all the money – but when in Cardiff, he took up with Beryl – a receptionist – who he eventually married. He had two daughters by his first wife. When he divorced her all her money went to him – the way the law was then. One daughter married a Scottish soldier and she wrote a book Water under the Bridge which related to the Japanese bridge in Clyne Gardens.”

“Jimmy Harris made a collection for the war effort – 32 shillings – and he asked me to deliver it in person to the Admiral. I was 16 years old and didn’t understand the hierarchy. I went to the front door; it was opened by the butler but I insisted on speaking to the Admiral and went in to deliver the money to the Admiral in person – he was only a short fella. He didn’t offer me anything, not even a glass of sherry!”

It was while Peter was waiting for his call-up papers, which arrived on 1 June 1944, that he worked in the timber industry in Clyne Valley. He was living in Mumbles and cycled everywhere. Eventually, work declined in the valley and he was transferred to Parkmill where there was an abundance of timber for felling.

The sawmill he worked at was south of the Railway Inn on the west side of Clyne valley near the railway (now the cycle track) and fairly near the clay pits area. It was powered by a kerosene engine with a big flywheel that sometimes backfired. There were charcoal burners nearby.