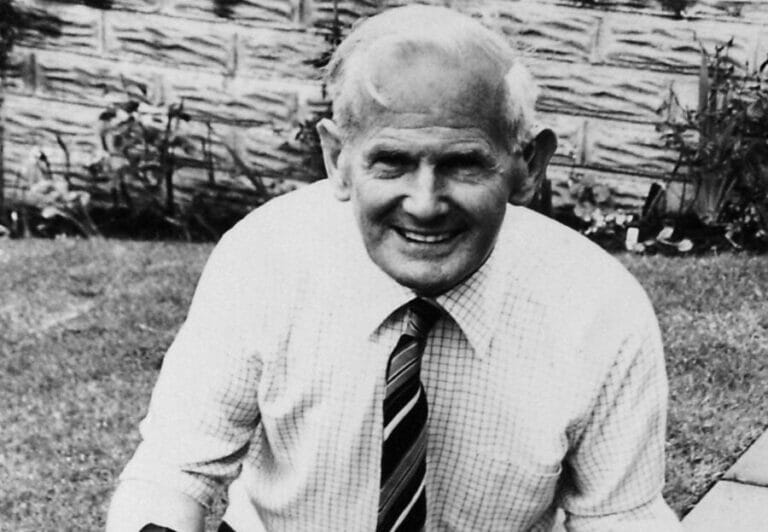 Historian of the Clyne Valley

John Hayman was born in The Strand, Swansea on 26 January 1918 and died on 22 June 20ll.  When he was quite young, his family moved to St Thomas where he was educated.  While still a young boy he became deaf, a disability with which he had to cope for the rest of his life.  He left school at the age of 14 at the time of the depression when very few school-leavers could find regular work.  He had various ill-paid jobs such as builder’s labourer (wages a farthing an hour) and selling refreshments from a trolley on High Street station, interspersed with periods of unemployment.

It was at this time that he developed a keen interest in aeromodelling.  In 1932 he and a friend began designing and making model aeroplanes which they launched from the hill in Grenfell Park.  Many younger boys joined them and were happy to race off and retrieve the models in return for a chance of launching one.  This was the start of the very successful Swansea Aeromodelling Club which continued for many years.

In 1936 he and other friends constructed, under a railway arch, a full-sized glider mainly from tea chests and other materials found in scrap yards which they attempted to fly on Fairwood Common.  After several failed attempts by the other enthusiasts, John was successful in getting the glider up about 30 feet over a distance of 300 yards, thus becoming the first man to fly on Fairwood Common.

When war came, he volunteered for the RAF but, much to his disappointment was put into the army.  He successfully completed his training with the Royal Engineers Chemical Warfare and Bomb Disposal Unit, but, before he could be posted, he was discharged as medically unfit because of his deafness.

Then, following in the footsteps of his father who was a GPO Linesman, he obtained a post as a GPO Telephone Technician, studying in the evenings to obtain more qualifications.  He worked in the GPO Telephones, later BT, for the next 40 years and took part in the many advances that were made in communications technology during that time.

In 1947, when on a training course in Staffordshire, he went to a dance where he met a young student named Maisie from a neighbouring college, who was celebrating her birthday.  Maisie’s home was in Peterborough, where they were married on her next birthday.  John proudly brought her to his beloved Swansea where they lived happily for the next 61 years.

With the arrival of their three sons and three daughters, John’s life revolved around his home and family.  He passed on to his children his love of walking and together they enjoyed exploring the less familiar places in their home city and in Gower.  On one such Sunday afternoon expedition, his teenage children were following him as he ploughed through the undergrowth in Clyne Valley when they came across a strange ivy-covered tower, which aroused their curiosity.  Further exploration revealed a derelict brick-built flue running down the hillside to a series of ruined buildings.  Fascinated, John delved into West Glamorgan Archives and found that they were the remains of arsenic works.

This was the start of his all-consuming passion for researching the industrial archaeology of the Clyne Valley.  His children lost interest but his enthusiasm knew no bounds and alone he spent untold hours, armed with a stout stick, exploring the wilderness that was Clyne and becoming excited with every new discovery ‒ a bell pit, a colliery winding wheel, traces of a railway track, a brick pit, a shard of pottery and much more.  In the undergrowth, he came across two open shafts of which the Coal Board had no record and which they sealed off.  He recorded and photographed all his discoveries and delved into the Archives and perused copies of the Cambrian newspaper to find references to the valley.  He loved maps and painstakingly drew and copied maps of every area of Clyne and then photographed them to make slides.

He started to be invited to share his slides and his knowledge of Clyne with local groups and gave well over a hundred slide shows on the subject.  He had so many slides that they had to be divided into three separate shows.

His interest in industrial archaeology and local history extended beyond Clyne.  He enjoyed investigating all aspects of local history and gave many slide shows on old Swansea.

In particular, the early morning services which used to be held in the underground chapel at Mynydd Newydd Colliery caught his imagination and he carried out detailed research into this topic with the same dogged enthusiasm and persistence which he brought to all his interests and hobbies.  When his children had grown up, these included yoga, ballroom dancing, photography, badminton, gardening, membership of Sketty Contact Club and of the South West Wales Industrial Archaeology Society, to name but a few.

Despite all his many outside interests, John was very domesticated and could turn his hand to anything in the home from cooking to DIY.  He was a devoted husband and father and later a loving grandfather to his 18 grandchildren and 4 great-grandchildren. John Hayman and his family donated his extensive archive of the Clyne Valley to the Clyne Valley Community Project some months prior to his death in June 2011.