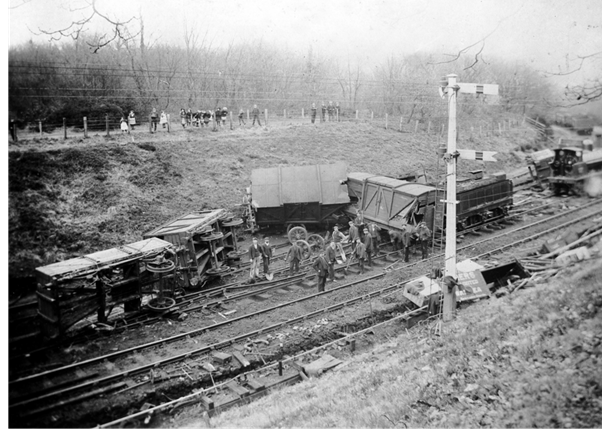 The 1906 railway accident at Rhydydefaid

On 24 January 1906, the Cambria Daily Leader reported that there had been a ‘serious’ collision at Killay earlier that day on the LNWR line when a goods train from Shrewsbury to Swansea, carrying garden produce, bacon and sewer pipes, came into collision with a coal train emerging from the Rhydydefaid colliery siding.  This siding was carried through the woods on a long embankment and connected Commercial colliery to the mainline.  Under the headline ‘Goods Train Smash Up’, the paper reported that ‘a scene of wildest description followed.  The impact was terrific.  The engine of the in-coming train smashed into the coal wagon, completely destroying it, and derailing several others, besides tearing up the line for a considerable distance’.  The engine driver, fireman and guard sustained slight injuries and were removed to Killay station for medical treatment.

Due to the amount of debris on the line, ‘the incoming passenger train passengers were unable to proceed to Swansea, and were compelled to detrain, many walking into town via Sketty’.  However, a breakdown gang was soon on the scene.  The up line was clear at noon in time to allow the 12.30 train from Swansea to the north to proceed and the down line was cleared during the afternoon.

The report locates the accident between Killay and Dunvant; however, a photograph of the accident and the description in the press indicate that it happened about 300 yards south of Killay station, where the Rhydydefaid siding joined the mainline.  The line of fence posts shown in the photograph can still be seen today on the northern embankment of what is now the Clyne Valley cycleway.

A fuller report two days later in the Cambrian confirms this location and explains that the 8.20 goods train from Swansea to Pontarddulais had ‘put into [the] Commercial Siding in order to get two or three trucks of coal, and when emerging from the siding had to cross the direct line to Swansea’.  The train from Shrewsbury was running late and it appears that the local goods train could not get clear of the mainline in time.

The report goes on to say that the engine of the train from Shrewsbury was ‘badly mauled’, having the front knocked in, the buffers torn off, and the wheels thrown off the line.  The first truck behind the engine bounded into the air and fell on the side of the line; the second mounted the first and was drawn right across the permanent way.  Five other trucks behind were derailed and three were badly splintered, but the majority of the trucks on the Shrewsbury train (22 in all) stayed on the line.  Four trucks of the local train were badly smashed and thrown on their sides.  The engine, however, although bearing traces of impact was not incapacitated from further work.  When the driver and fireman of the Shrewsbury train saw that a collision was imminent, they jumped from each side of the engine.  The driver cut his left knee and had his right fore-finger broken, whilst the fireman fell on his side and injured his back and side.  The driver and fireman of the local train escaped without injury.  The guard of the Shrewsbury train received cuts on his head but was not seriously injured.

A photograph of the accident can be seen in the Railway Inn at Killay.

[From contemporary press reports and an article by David Whitehead, ‘The Commercial colliery, Killay: tracking its legacy’, The Swansea History Journal (Minerva), no 21 (2013–14), pp. 23–30]