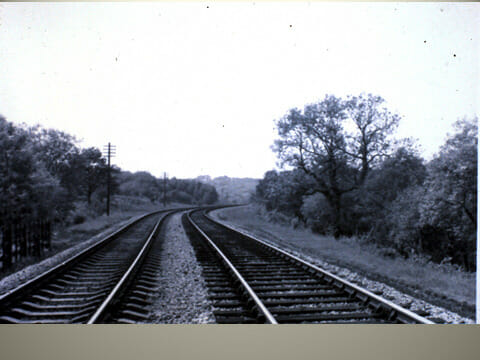 The Llanelly Railway (New Lines) Act of 1 August 1861 authorised the Llanelly Dock Company (incorporated in 1828 and reconstituted and incorporated in 1835 as the Llanelly Railway and Dock Company − LR&D Co) to extend its railway network further with two additional standard-gauge (4 ft 81⁄2 in) routes.  The first line to open was from Llandeilo to Carmarthen.  The second line comprised a 121⁄2 mile branch from Pontardulais to Swansea and a further branch line off that line at Gowerton to Penclawdd.  The appointed contractors were Watson, Overend & Co.  The 1861 Act also provided for part of the Swansea & Oystermouth Railway’s trackbed to be realigned on the approach to Swansea, and for the parallel turnpike road (now the A4067) to be moved.

The Llanelly Railway and Dock Company’s interest in building the Swansea line was to gain access to an area that had become a major centre of industry and a fast-growing port.  They commenced building the Swansea Extension (also known at that time as the Dunvant Valley Railway) in 1863 and the line opened to goods and mineral traffic in January 1866.  A shortage of funds left the passenger terminus at Swansea Victoria incomplete and some of the stations were temporary structures.  A full passenger service did not, therefore, commence until Saturday 14 December 1867.

Gowerton station was known as Gower Road until 8 June 1886 when it became Gowerton, then Gowerton South from 1 January 1950.  Dunvant, Killay and Mumbles Road stations were opened on 4 December 1867.  There were wagon sidings at all three stations; extensive at Dunvant to serve the collieries, quarries, iron foundry and several brickworks.

The London & North Western Railway (LNWR) had courted the LR&D Co for some years for closer co-operation in the working of the railway.  After a substantial loan to the company in 1867 to complete the Swansea Extension, the LNWR was granted leases which gave full running powers on the Pontardulais–Swansea line.  The LNWR finally took full control on 27 July 1873, having purchased the line and the Penclawdd Branch in 1872 for £310,000.

The Pontardulais–Swansea line was originally single-track throughout, but all stations, junctions, bridges, embankments and viaducts were constructed with an allowance of land for the subsequent addition of double standard-gauge track and the possibility of carrying a broad-gauge line as well.  Subsequent doubling of the Gower Road to Killay section was completed by the LNWR on 15 February 1876, but the section from Killay to Swansea Bay station (St Helens) was not completely finished until 29 May 1892.  The original single line then became the ‘down’ line to Swansea and the additional line to Pontardulais, the new up ‘line’.

The route to Swansea took the line south through Gorseinon, passing over the Great Western Railway’s South Wales line from Swansea to Fishguard just north of Gowerton.  Then climbing for a mile at a gradient of 1 in 72 to Dunvant station and then down again for a mile at 1 in 70 to Killay station.  The line then descended southeast through Clyne Valley woods at an initial curving gradient of 1 in 70 and then at 1 in 80 with a short 1 in 90 climb into Mumbles Road station.  The line then crossed over the Swansea to Mumbles main road (A4067) and the track of the Mumbles Railway using the Blackpill railway bridge which was laid on a left-hand curve down.  As the line came off the bridge and onto the southern embankment the line passed a coal yard owned and operated by the Oystermouth Railway which backed onto and joined the Mumbles Road station sidings.  Finally, the line ran along the seashore of Swansea Bay between the seawall and the Oystermouth Railway to the new terminus at Swansea Low Level, then a basic low-cost train shed.  This was later replaced by the LNWR in 1892 with a much improved three-road stone building with a full glass roof and renamed Victoria Station.

Original features on the line – north to south

A culvert beneath the railway trackbed draining marshland (SS 59417 92753).  This may not be an original feature and may have been added by the Local Council after the line’s closure.

A concrete line post (or distance marker) is located on the downside embankment indicating 8 miles from Pontardulais station (SS 60150 92120).  It was near this point that the 1906 railway accident occurred.

Two stone arched under-bridges incorporated into the railway embankment over:

The base wall remains of an abandoned platelayer’s hut or lineside shelter, situated on the ‘up’ side of the line (SS 61075 91839).  This is where a platelayer would historically be based.  He would regularly patrol his section of the track looking for line faults.  Huts were generally a single room, immediately adjacent to the running lines, equipped with a table, chairs, and a simple heating stove.

An under-bridge with wrought iron girders on low stone abutments over the Clyne Wood Canal (SS 61269 91414).

The derelict remains of a retaining wall for the Clyne Wood Canal (SS 61350 91160).  Still visible between the Fishing Lake and the Stone Cottage situated on an embankment above the ‘up’ line.

A limestone field access under-bridge beneath the railway trackbed, with later reinforced concrete additions for strengthening (just to the north end of the Mumbles Road Station (SS 6168 9080).

The Blackpill railway under-bridge was sited immediately after Mumbles Road station and was of a cast-iron trough girder design with stone abutments at both embankment ends and a central stone supporting pillar between Mumbles Road and the Oystermouth Railway (SS 61949 90755).

The first connection, with associated sidings, was off the LNWR’s original 1863 single down line at Rhydydefaid south of Killay Station.  This gave access by means of a double reversal to the Clyne Valley branch of the Oystermouth Railway (as extended prior to 1854) and also the adjacent Rhydydefaid No 1 Pit.  The connection was in use by January 1876 with the points being controlled by a ground frame; the connection was taken out of use in June 1893.

This layout was substantially revised after doubling (completed 29 May 1892) to serve the new Rhydydefaid No 2 (or Commercial) Colliery.  The line to the new slant was put in from the existing siding of the LNWR which had served Rhydydefaid No 1 Pit.  Both the up and down lines were connected and a signal box was installed in June 1893.  The railway is shown on the 2nd edition of the Ordnance Survey 6in map (revised 1896-7) and it can be assumed that it was in existence by the time the colliery opened in 1891.  Both the connections and the associated signal box were taken out of use sometime between 1909 and 1911.

A second connection with the Clyne Valley branch of the Oystermouth Railway was east of the Mumbles Road station and the Blackpill railway bridge.  Coal trains that had come down Clyne Valley on the Oystermouth Railway had to back-shunt west towards Oystermouth and then run forward over points into their coal yard and through the adjacent LNWR Mumbles Road station goods yard on one of the two sidings available.  The station goods yard was connected to the LNWR’s original 1866 single line to Swansea and was initially controlled by a ground frame until May 1893 when it was replaced by a 16-lever box signal box (rebuilt in 1912) and taken out of use in 1964.

In January 1923, at the time of restructuring Britain’s railways into four distinct business groups, the whole of the LNWR’s Shrewsbury to Swansea Central Wales line (including the Pontardulais to Swansea section) was incorporated into the new London Midland & Scottish Railway group.

When Britain’s railways were nationalised on 1 January 1948 the line became part of the Western Region of British Rail.

Passenger traffic ceased on the Pontardulais to Swansea line on 14 June 1964 and the line finally went out of service with a halt to local freight traffic on 5 October 1965.  British Railways (Western Region) awarded the contract for track removal and recovery on the Swansea (Victoria) to Gorseinon line to Messrs Henry Boot Ltd of Sheffield; it was anticipated that it would take 17 working weeks to complete.  It is likely that all the line side metalwork e.g. signals, were removed at the same time as the rails and other line side structures including buildings which were made safe.

The Blackpill railway bridge was removed later along with its stone central support pillar.  The bridge approach embankments on both sides of the road remained in situ until the early 1970s when 75% of the station embankment including the station buildings, platforms, bridge and abutments was removed to allow widening of the A4067 Mumbles Road.

In 1980 Swansea City Council purchased some 700 acres of land in the Clyne Valley including the track of the former railway line which was cleared and tarmacked to make a path for leisure walking and cycling, becoming part of the Council’s Cyclepath and National Cycle Network route 4.  The whole area was designated as the Clyne Valley Country Park.