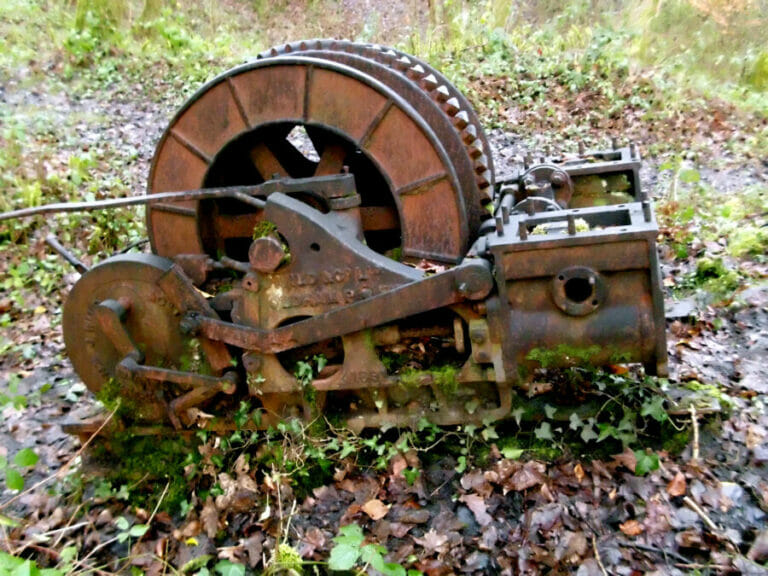 The slant can still be seen as a deep excavation, not to be confused with another deep hole nearby which is probably the result of later brick clay extraction on the site of the Clyne Wood colliery.

The slant is the result of a short-lived attempt to work the coal that was made by the West Glamorgan Colliery Co Ltd under a lease from the Beaufort estate.  The entrance was at the eastern end of the slant and is now completely obscured.  The West Glamorgan Colliery Co was created by James Pridmore (1879-1953), the grandfather of the politician Michael Heseltine.  The company was registered in July 1919; it worked the Yard and Yankee veins at Ynys between 1919 and 1921 and also opened and briefly worked the nearby West Glamorgan Slant (1920-21).

The name by which the colliery is commonly known is Ynys or Rhydydefaid Slant but it seems that it was initially known as Caemawr.  Operations commenced in the summer of 1919 with a labour force of 13 underground and 8 on the surface.  In a letter to the manager of the Mumbles Railway & Pier Co dated 15 October 1919 Pridmore stated that the colliery was ready to commence production and that he hoped to achieve an output of 60 tons a day.  He also hoped that the Clyne Valley branch of the Mumbles Railway could be extended to the site of the colliery, a distance of about 1000 yards since he would prefer to send his output by the Clyne Valley branch rather than by the LNWR even though the line of the latter ran only 200 yards from the colliery.  Not surprisingly the railway company was not prepared to undertake the extension and so Pridmore had to lay his own narrow-gauge tramway on the line of the abandoned Clyne Valley tramway.  This was completed in July or August 1920 and the Mumbles Railway Company agreed to send a locomotive up the branch as far as Ynys Gate (the terminus of their branch) to collect loaded coal wagons subject to a minimum load of 50 tons.  By this time Pridmore claimed that he had several hundred tons waiting to be shipped.

Ynys Slant only worked for a few more months and was abandoned on 28 January 1921.  An entry for the slant appears in the Colliery Yearbook for 1923 and 1924 but this should not be taken to indicate that it was re-opened, rather (as can be demonstrated from the entries for other companies) that the compilers often repeated information from year to year without updating it.  However, the figure that is given for the number of men employed (17 underground and 8 on the surface) is likely to be a reasonably accurate figure for 1920.

A particularly interesting survival is a small twin-cylindered winding engine made by John Wild & Co of the Falcon Ironworks, Oldham and carrying the date 1891.  It was manufactured under their patent 5878 (of 1891) which covered improvements in valve gear for reversing the motion of steam and other engines.  The date is thus the date of the patent and not necessarily that of manufacture.  It was probably acquired second-hand by the West Glamorgan Colliery Co. A very similar engine to that at the Ynys slant is illustrated and described in C G Warnford Lock, Mining and ore-dressing machinery: a comprehensive treatise dealing with the modern practice of winning both metalliferous and non-metalliferous minerals, including all the operations incidental thereto, and preparing the product for the market (London : Spon, 1890), pp 280-1.

Fig. 459 shows a portable hauling and winding engine introduced by John Wild & Co., Limited, Falcon Iron Works, Oldham, specially designed to meet the demand for engines for colliery use, which can be fixed and handled by unskilled men, and which can be readily moved about from one part of the mine to another like an ordinary pit tub, re-fixed, and set to work in a few minutes, by simply coupling the flexible tube to the air mains.

Underneath the bed-plate or truck, there are a number of screws fixed for tightening down to the floor, so as to take the weight off the wheels, and so secure greater rigidity whilst at work. Engines of this type are made with cylinders up to 10 in. diameter, but the general range runs from 4 in. to 8 in. They are designed for either steam or compressed air.

This suggests that the engine could have been installed underground, but it is more likely that it was used at the head of the slant, fairly close to its present position, to wind journeys of coal up to the surface.  In either case it cannot now be in its original position.  Perhaps an attempt was made to retrieve it for re-use elsewhere after the slant was closed but abandoned before the engine had been moved more than a short distance.