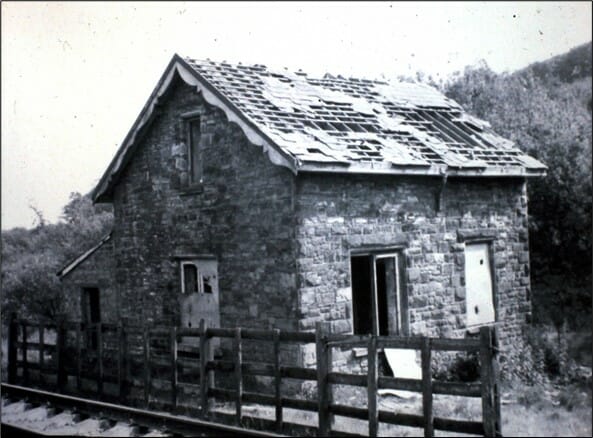 Recollections from his family

George Valentine Sharp, known locally as Sharpy, was born in London in about 1885.  Sharpy, his wife and Gerry, unofficially adopted and brought up by Sharpy and his wife, lived in Clyne Wood cottage beside the main line railway track between Killay and Mumbles Road stations.  This small cottage had few amenities; it had oil lamps for lighting, hooks in the ceiling to hang meat, water collected from a nearby spring and a big black range to cook on and keep the house warm.  There was a scullery and outside there was a raised brick/stone structure to the left of the door for chopping wood.  They kept chickens and a pig which a local butcher would kill and share out with Sharpy.  The garden was long and fed them well with vegetables.  When Gerry’s son, David, was 4 or 5 the family moved to the newly built West Cross estate while Sharpy remained in Clyne for some years until he joined the family to live at 84 Mulberry Avenue until his death in his 70s.  Sharpy had sadly lost his wife after she was knocked down by a train in the valley.

Sharpy’s job was to check the rails through the valley to ensure safe passage of the trains passing through and keep an eye out for all things relating to the railway in his patch.  Son Gerry was a junior porter at Mumbles Road station prior to his joining the Royal Navy during the war.  He was a Blackpill lad and known as Sharpy’s boy.  He attended Blackpill School until he left at 14 and like many lads he worked as a messenger boy, in his case for a butcher in Mumbles.  As a young boy, Gerry met the Admiral and his dogs in Clyne woods.  At one time Gerry worked at the farm helping out with the horses and doing other jobs.

The cottage would have been a bit isolated and David recalls his dad saying if there was any illness, then the doctors Gerwyn Evans, Iorwerth Jones or his brother Gwent Jones would have to walk or maybe cycle from Killay station to visit.

An interview with Brenda Davies, a resident of Dunvant, revealed: ‘Sharpy attended Ebenezer Chapel in Dunvant as a non-member’.

Peter Mathews remembers: Sharpy, the ganger, was involved in the loading of timber onto trains.  ‘One Sunday we pushed a rail bogie to Killay station to bring down a 40-gallon drum of diesel or oil.  The barrel was loaded in the centre and four of us, including Sharpy, standing like sentinels, free-wheeled back to the site.  It was quite hair-raising, reaching a fair speed.  Sharpy as brakes-man let it go a bit.’

Any remains of the cottage are now hidden by nature but its position can be seen on the map below.

‘I’ve been told that there used to be a cottage somewhere between the Railway Inn and the house next to the line where a woman called Mrs Sharp lived, I think.  Might be wrong on the name, I’m afraid.  Well, she used to walk from her cottage to my nan’s house most nights for a cuppa along the tracks, but she knew the train times well so she was never at risk of seeing a train.  The last train of the day would go up through Clyne at 21:20 and Mrs Sharp would always stay at my nan’s until after the train had passed and then make her way home, knowing it was safe.  This went on for years, so I’m told, but one night, for some strange reason, she decided to leave early and unfortunately she was fatally hit by the train.’

He also tells a story about the cottage at the end of the caravan park at Blackpill where his grandparents and parents lived:

‘Well, my mum swears by that house at the end of the caravan park being haunted.  One of the strange things that happened when my mum was home alone one night with the dog was footsteps across the ceiling as if someone was upstairs, and she says that at the bottom of the stairs there used to be a door that was always shut.  The footprints came down the stairs and stopped at the bottom without coming through the door, the dog was going completely mental, but she swears there was no one else in the house at the time.’