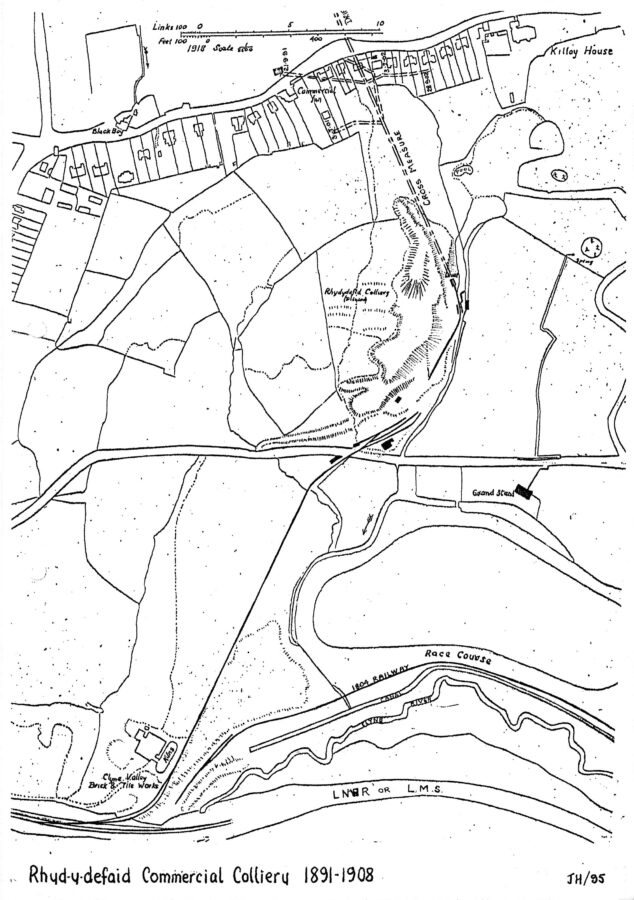 Following the closure of his Rhydydefaid No 1 pit the lessee of Morris minerals, Philip Richard II (1844-1912) opened up a new part of his taking by means of a slant to the north-east of the Rhydydefaid pit. It was located in woodland to the south of Gower Road and behind the Commercial Inn, Killay. The project seems to have been under active consideration by 1888. The entry for Rhydydefaid in the 1888 List of Mines notes that special rules were signed on 14 December 1888; neither the old Rhydydefaid nor the new Rhydydefaid was in work at this date, so this must be taken to indicate preparations on the part of Richard for his new colliery.

By 1891 the slant, under the name Rhydydefaid, was ready to start production. In March, very probably in connection with his new slant, Richard was advertising for a ‘First class mechanic to take charge of machinery at a colliery’ and in April work the first work in the Glylid seam was recorded. A railway connection to the LNWR line was put in as a necessary part of the development. The embankment that carried this railway is still a prominent feature in Clyne Woods.

During the 1890s the slant worked intermittently and on a small scale. The Glylid seam was extended steadily westwards towards Dunvant until October 1893; surviving plans show that only a limited area of pillar and stall work was actually opened up for production although further exploratory work in the seam continued until December 1894. The Wernddu seam was worked on a small scale between December 1891 and December 1892 and the Wernpistyll very perfunctorily in 1893. There was also small-scale working of the Rock seam in 1892 although by October 1893 a long exploratory roadway had been driven west well beyond Olchfa bridge. But by the end of 1894 very little work was being done and in 1895 the colliery was suspended, being described in the List of Mines for that year as ‘Discontinued 1895’. The reason might have been a sudden dip in the seams making it no longer possible to work the colliery economically.

In 1896 Richard started to explore the coal under Llanerch and Olchfa (41 acres) which lay between Dunvant Road and Hendrefoilan Road and adjoined his existing taking. He went on to take a lease of the coal in 1898. This gave him access to an area of more easily worked coal in the Penclawdd seam which made the colliery a more viable proposition. Work recommenced in 1896 but still with only a small number of miners. By 1899 there is evidence from the Iron and Coal Trades Review that once again Richard had suspended work:

The colliery was indeed reopened that year under the name ‘Commercial’, taken from the public house in Killay behind which it was located. From the outset it was a more successful undertaking; there was a great increase in the number of men employed and consequently in the area that could be worked and in the level of output. Many of the men were brought in by special workmen’s trains from north Gower. The Rock vein was worked initially and during 1899/1900 an area of coal to the south of the earlier roadway was opened up. However, the main thrust was to the north and by July 1900 the Penclawdd vein had been reached. For the rest of the colliery’s existence, this was the main area of working. It was divided into two sections, a southern section bounded to the south by Dunvant Road which was worked out by October 1905 and a northern section, bounded to the north by Hendrefoilan Road which worked until 1907. Both areas extended west beyond Hendrefoilan Road towards Dunvant. There were also limited attempts to work the Clement vein (1903) and to extend the Glylid vein westwards from its earlier workings (1905). Finally, small-scale workings, probably no more than exploratory, were made behind the Commercial Inn in 1901 and 1902, a re-examination of an area that had been investigated briefly in 1891, but on neither occasion was any further exploitation attempted.

However, despite his apparent success, Richard was facing financial difficulties. As well as Commercial he owned Weigfawr pit at Cockett and Dunvant slant near the former railway station and all three were running at a loss. He had invested heavily at Dunvant without sufficient capital, the terms of the Weigfawr lease were excessively onerous and his use of old and inefficient boilers and other equipment led to high pumping costs. Richard’s financial state was reflected in the operations at Commercial and his other collieries; he had difficulty in attracting labour because he could not match the wages paid at the neighbouring Clyne Valley Colliery and this shows in the numbers at Commercial which had declined to 135 by 1907. In 1907 Richard entered into negotiations with Cammell Laird (who had recently acquired Clyne Valley Colliery) and in July he sublet part of his taking to them. Cammell Laird continued to work the Penclawdd vein until November 1907 and the colliery was then formally abandoned on 21 February 1908. Richard himself was declared bankrupt the same day with gross liabilities of £56,094 and a deficiency of £27,380. There was some talk of his friend D W A Saunders putting together a syndicate to take over the mines but nothing came of this and Commercial remained closed. It has been suggested that it reopened in 1913-16 but no evidence has been found to support his statement; it probably refers to the working from Dunvant of veins that had earlier been worked through Commercial.

Any surface remains that still survive (as of 2019) are a probable weigh-house at the point where the railway embankment crosses the bridleway from Rhydydefaid Drive to Killay (SS 60480 92523). Scattered pantile fragments are probably from the roof of the building; the word BRIDGEWATER, the place of manufacture, can be seen impressed on some of them. A stone and brick-built wall alongside the former railway track to the north of the bridleway may represent a tipping stage or is perhaps simply a retaining wall. It is interesting to note that the bricks used in the construction of this wall are all stamped P R which shows that they were made at Philip Richard’s Dunvant brickworks. The mouth of the level itself is filled in and heavily overgrown and can no longer be seen. Large spoil heaps exist in the woodland although access is difficult.