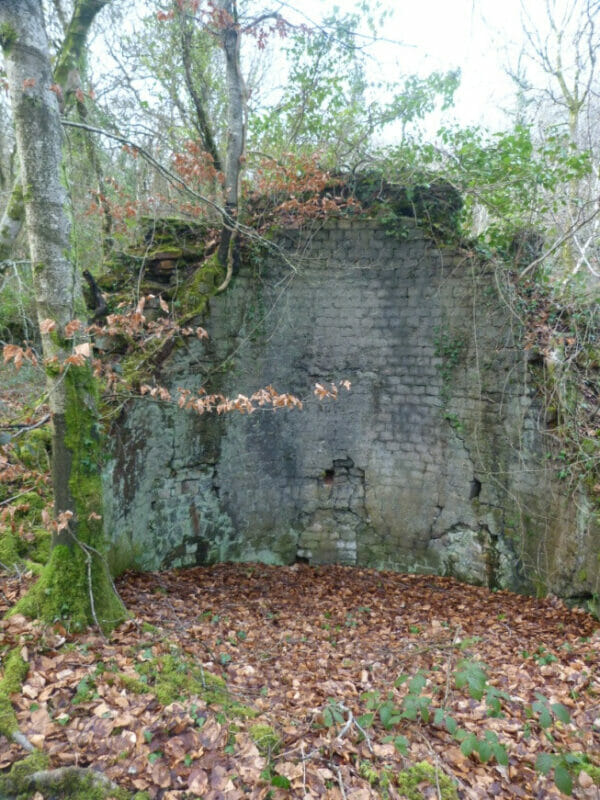 It may appear strange that such works were present in the valley.  As the industrialisation of Swansea intensified, various mineral deposits in the valley became increasingly valuable.  There was a high demand for coal and lime for copper smelting and the china works.

Henry Kingscote (a Cornishman) leased from the Duke of Beaufort a parcel of land east of Clyne Castle and built a chemical works (possibly 1825-30).

MR DAVID HOWELL WILL SELL BY AUCTION on Monday, April 21st, 1845, and following days, at Clyne Wood, near Swansea:
All the STOCK, TRADE FIXTURES, and other MATERIALS, belonging to the MINERAL AND CHEMICAL WORKS; comprising large quantities of wrought and cast iron; pipe, sheet, and pig lead; zinc, tin, brass, copper; fire and other bricks; Stourbridge clay; copper, iron, lead, zinc, blackjack, and other ores: Bathurst’s patent weighting machine; chains, ropes; about 40 fathoms of boring rods and bits; self-acting bellows, blow-pipe and stand; carpenters’ shop, fixtures, and smithery, with three large extra forge bellows, anvils, vices, etc.; seven-horse power high-pressure steam engine, 20-inch stroke, 12-inch cylinder, with boiler and other appendages complete; six-roller clay mill, with four cog-wheels; several large fly-wheels for engine purposes, a number of four-wheel iron waggons; large quantities of Oak, Ash and Memel timber, sawed and seasoned, and fit for working; twenty-seven new wheel-barrows, five coal barges, with several hundred lots of other miscellaneous articles.
Catalogues and conditions of the sale will be ready for delivery in a few days, on application to the Auctioneer, or at the office of Mr Jeffreys, Solicitor, Swansea.
The sale is to commence at eleven 1 o’clock in the forenoon of each day.

By 1845 Kingscote’s business was put to auction; the following notice was posted in the Cambrian dated 19th April 1845.

Pearse’s Directory of 1852 lists James Jennings and his son Nicholas as the owners of the works.  John Hayman suggests that Jennings closed the works at Blackpill in 1856 when they moved the business to Dan-y-Graig.  Two years later, the Cambrian (27th November 1868) reported that ‘Nicholas Jennings of Swansea, Arsenic Manufacturer, trading in co-partnership with Joseph and Nicholas Jennings, was adjudged bankrupt on August 8th 1867’.  An Order of Discharge was granted by the Court of Bankruptcy for the District of Bristol on 6th October 1868.

Stephen Hughes1 suggests that the works were closed about 1860 to remove the source of smoke and fumes from Woodlands (now Clyne Castle).

What remains of the Arsenic Works today

Hayman suggested the works remained in a good condition due to its isolated position and being part of Clyne Wood estate until the City Council took it over in 1952.  However, currently (2019) it is in a poor state as nature reclaims the area.  The ground is potholed in areas where the underground flues have collapsed, but it does make finding them easier!

John Hayman reports on an exploration of the site in 1985

With the help of John Radford, we found an iron doorway in the wall alongside the line of furnaces.  John suggested it could have been used to control the draught.  He also uncovered the remains of two hinge brackets on the right-hand side of the doorway and a latch on the left-hand side.  The archway was roughly 30 inches high and 20 inches wide with a half-circular top.

The walls of the main building are still standing, complete with fireplaces, several furnaces, four large pillars which supported the roof of an open-sided shed (which could have been the hay shed), brick and stone flues and the remains of a lime kiln.

Halfway up the main flue leading to the tower, there is what appears to be a second tunnel that runs almost parallel to the main flue and cuts into it the purpose of which could have been to drain water from the main flue.  At this point, a barrier could be placed to allow the fumes to go up, but turn any water coming down from the tower into the second tunnel.

Most of the main flue from the works to the tower 400 feet up the hillside is still sound and solid.

We also came across a water culvert about 27 feet from the outer sidewall of the works on the Clyne Castle side.  The outlet is about 2 feet high and 18 inches wide and goes up the hillside towards a pond higher up than the tower.

The main entrance to the works was behind Roman Bridge Close, off Mill Lane.  There was also a track on the Killay side of the works leading to the large stone quarry beyond the farm where Clyne Farm stream descends to join the river.

Sources of coal for the works

There are two drift mines that may have been worked to provide the coal required for the works.  One is on the grounds of what was once a keeper’s cottage, which is the last house on the left-hand side beyond the caravan site at the Blackpill end of the Valley.

The other mine is a few hundred yards up the Valley at the pool which is fed from the stream coming down from Clyne Farm.  During 1980-81, this level was explored by Ian Wright wearing a wet suit, since it was flooded up to waist level due to the silting of its approach entrance.  The adit was slightly curved and after about 35 yards it was blocked by a rockfall.  Later, a more thorough investigation was carried out by Stephen Hughes and D K Leighton.  This involved clearing out the silt in order to reach the bottom of the adit, where a layer of coal dust was found and also badly warped planks about 2 inches thick, 9 to 10 inches wide and about 8 feet long.  The planks were resting on a bed of pebbles.

The conclusion drawn was that this was a barrow-way and the pebbles were to allow the water to run out of the adit into the mill leat.  Also, the coal could be brought out and tipped straight into the canal barges for transportation to the Arsenic Works.  This would explain the 27 wheelbarrows and five coal buckets listed for sale in 1845.

On completion of the excavations, the earth was used to form a dam, thus allowing the adit to re-flood; later on, an iron gate was installed to prevent the entry of any would-be explorers.  The approaches are now heavily overgrown and blocked with fallen timber.

As part of the Clyne Valley, Country Park development steps were cut alongside the mine entrance going up the hillside to link up with another path that runs along the hillside.  About halfway up, on the left-hand side, was an air shaft, which has now been filled in, leaving a mound of earth and a small hollow.

The 1879 25 inch Ordnance Survey map shows the old coal level at the pond, but not the one at the Keeper’s Cottage.  It also shows an old coal pit 30 yards north of the works and signs of a slag heap 140 yards beyond the building.

From the Blackpill map of 1803, the second leat of 1799 was increased in width, thus becoming a canal to enable the passage of barges.

Manufacture and use of arsenic

Arsenic was obtained in this country by roasting some arsenious ores of iron and copper and condensing the volatilized arsenic fumes.  The principal ore used was mispickel (arsenic pyrite As2O3), the sulphide of iron and arsenic which occurs in both lead and copper veins.  The ore was washed, crushed to less than half an inch and then calcined.  The patent Brunton calciner was essentially a firebrick-covered circular iron plate revolving over a furnace, on which the crushed ore was laid and stirred.  The more general calciner was a firebrick-lined iron cylinder, up to 50 feet long, rotating over a furnace.

Both required a power drive, either a water wheel or a steam engine, for the crushers and kilns.  From the kilns, the arsenic vapour was led off through a labyrinth of flues and chambers, where the arsenic was condensed.

The flues and chambers are built with thick stone walls (2 or more feet thick) and led to a tall chimney up the hill (the Ivy Tower).  The chimney is designed to help the draught and to disperse the residual fumes.  The removal of the acid (arsenic) from the chambers is a dangerous occupation.  Workmen now wear leather suits, carefully fastened around every part of the body and over the head, which is further protected by a leather helmet with a glass screen.  Under the helmet, the mouth and nostrils are covered with a wet sponge or moist linen to filter the air.  Whether such precautions were taken in the 1830s is questionable.

After recovery from the flues, the arsenic went to a refining furnace where its vapour was condensed in tile-lined chambers.  The crystallised condensate was then collected and ground into flour. There was a demand for arsenic in some parts of the glass industry, in making enamels and in insecticides.