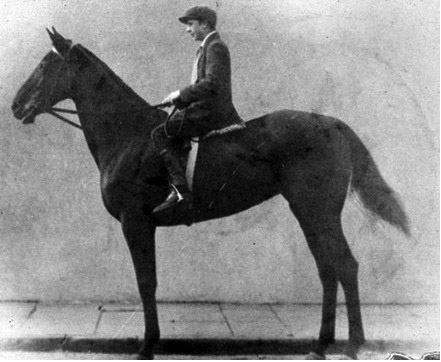 At one time there was a racecourse in the Clyne Valley. It is clearly shown on the Ordnance Survey 1:2500 revision of 1919. It was bounded by the Sketty to Killay bridleway to the north, Olchfa brook to the west and the Rhydydefaid extension to the Clyne Valley railway to the south. The map shows a small grandstand on the north side, just to the south of the Sketty to Killay track. The two earlier editions (1878 and 1899) show the racecourse area as a large field.

The racecourse was part of the Sketty Park estate owned by Sir Tankerville Robert Armine Morris (1892–1937) whose great-grandfather was Sir John Morris, 1st Baronet of Clasemont, well known for his development of Morriston.

In October 1870 the races, though popular, were subject to torrential rain. There was a successful meeting in 1886 when between 3,000 and 4,000 people turned up to the course. The Swansea & Mumbles Railway Company ran special horse cars from the Mumbles Road at Blackpill. The London & North Western Railway ran special trains to and from Killay station from where spectators had a pleasant 5-minute walk to the course. In 1890, on Whit Monday, 26 May, the Mumbles Railway ran a frequent service of trains from Swansea to Rhydydefaid Junction, which probably meant the very end of the Clyne Valley railway next to the old Rhydydefaid colliery which by then had been abandoned.

Two of the notables amongst the Clyne officials were Thomas Glasbrook, a colliery owner, and Major Pike, Mayor of Swansea in 1893, who acted as Honorary Treasurer. Clyne races were run under Welsh rules by Billy Yeo (a butcher from Uplands) before it was taken over by Sir Armine Morris and run under Pony Turf Rules.

The reasons for the closure of the racecourse are unclear; however, the attendance was poor and the going was often too heavy for successful racing.

When Sir Tankerville Robert Armine Morris died in 1937 (without issue) the estate was purchased by Swansea Corporation and used for landfill; the remains of the racecourse are now buried beneath the municipal tip.

In 2018 JJ and BP interviewed Phil Walker, grandson of Binky Walker who was the jockey riding Polemelus, the winner of the last horse race in Clyne Valley. Bryn ‘Binky’ Walker from Sandfields, Swansea rode numerous races across the U.K. He rode for Sir Tankerville Morris who financed Binky’s medical treatment in Germany after a nasty accident. Later in life, Binky drove the dray for Hancock’s brewery.