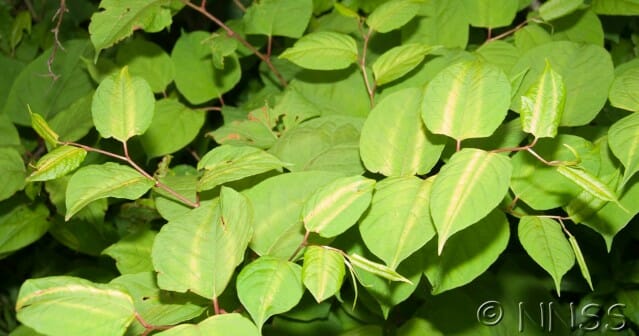 Japanese knotweed is prevalent within Clyne Valley Country Park, including Sites of Importance for Nature Conservation (SINCs) and in areas of Ancient Woodland. Many members of CVCP and visitors to the Valley are aware that the plant is spreading and are concerned about it. It provides negligible benefits for native wildlife and causes loss of biodiversity.

To halt and reverse the spread of Japanese knotweed in Clyne Valley, it is necessary to implement control measures. Clyne Valley Community Project volunteers have worked hard to record the location and extent, so that Swansea Council can manage the control. They have already cleared some areas of undergrowth to gain better access to the plants, ready for treatment to start at the appropriate time of year, around September/October. If you would like to know more, read on.

Japanese knotweed (Reynoutria japonica) is an invasive non-native species (INNS) of plant introduced into the UK in 1825 as an ornamental plant for gardens. By 1886 it was established in the wild and is now very widely distributed. It can outcompete most of the native vegetation in the UK, as there are no natural competitors limiting its vigour, abundance or spread. It spreads through extension of its rhizomes (underground root-like structures) which can extend to depths of 3 metres, and laterally up to 7 m, sending up new shoots.

Digging out Japanese knotweed would cause damage and destruction to the surrounding vegetation, involving extensive excavation and creating huge amounts of contaminated waste. It is neither practical nor cost effective, and carries risk of spreading the plant further. Instead, the most effective method of control is herbicide treatment. This is straightforward to undertake and allows the native flora to regenerate (the herbicide is appropriately diluted and non-residual).

Herbicide treatment is undertaken by trained and certified individuals using a combination of foliar application using a knapsack sprayer and by stem injection. As the plant enters dormancy it draws in all the nutrients from the leaves into the underground parts (crown and rhizomes) so it can remain alive over the winter period. Herbicide treatment is undertaken just before the plant goes into dormancy, so that it draws this down too, killing the underground crown and rhizomes.

The process is strictly controlled and managed to limit ‘collateral damage’, for example, spraying is undertaken during still weather and not before or after rain. Consent is required from the landowners, and from NRW to allow work next to/near water. The treatment takes several applications (typically three) before it is considered successful. It is expected that there will be some regrowth in the year following the first and sometimes second treatment, although typically it is much reduced in vigour. It is important to treat with herbicide only once per year during the period late September – early October and not to trample, pull, or cut during the growing season. This can cause the plants to become stronger, and if the plants do not have any leaves, they cannot be treated. It becomes harder to kill them. To make sure that the crowns and rhizomes are dead (not just dormant) we check there is no regrowth of the above ground shoots for two consecutive years following the final treatment.

So the process is going to take a while, but it is underway.

You can see more on the Swansea Council website https://www.swansea.gov.uk/knotweed

Today’s project was clearing the steps by the bridge...